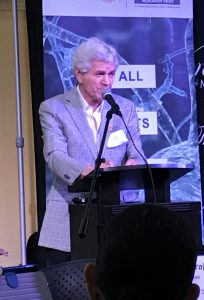 Founded in 1986 by Roger Ackerman, a Rotarian in Sumter, SC, The CART Fund (Coins for Alzheimer’s Research Trust) is a non-profit grassroots organization that provides “seed” money for cutting edge, high impact research grants to help find a treatment or cure for Alzheimer’s Disease.

Roger passed away in 2018, yet to this day, we still adhere to our founder’s initial mission – that 100% of every dollar donated goes directly to research! Since 1999, 64 grants totaling more than $11 million have been awarded to 62 recognized research institutions in the United States.

The CART Fund is a 501(C)3 organization (Federal ID #31-1466051) governed by an Executive Committee and a Board of Directors composed of representatives from qualified Rotary districts that support the program. CART is chartered as a nonprofit organization under the laws of the state of South Carolina.

CART has been recognized as an “angel charity” by the SC Secretary of State for being “extremely effective at giving a high percentage of their total expenditures directly to programs for their designated cause, their compliance with the S.C. Solicitation of Charitable Funds Act, and their high use of volunteers in their fundraising efforts.”

While primarily supported by members of Rotary Clubs in the United States, CART has an active volunteer base and can accept donations of major gifts, bequests or volunteer efforts from anyone. A new donor recognition program was recently introduced, allowing “recurring donors” through the online system to be designated as members of the “Roger Ackerman Circle.”

Our Board President Rod Funderburk is in the House of Friendship this weekend at Rotary International District 7770 Presidents Elect Training! #PeopleOfAction #RotaryGeek 💙💛 #ENDALZ ... See MoreSee Less